New Delhi: Eight years after they made waves at the Beijing Olympics, two of Indian boxing’s most celebrated names — Akhil Kumar and Jitender Kumar — are set for a comeback to the ring by turning professional. The two boxers, both of whom are Commonwealth Games and Asian Championships medallists, are close to finalizing a deal with Infinity Optimal Solutions (IOS), who are India promoters of the reigning WBO Asia Pacific champion Vijender Singh.

The two boxers are awaiting permission from their current employers — the Haryana Police — to officially take the plunge like Vijender, a DSP with Haryana Police. Everyone who has followed Indian boxing knows the kind of impact Akhil made in changing the face of the sport. His style, aggression, and unabashed passion for fighting for the nation endeared him to one and all,” IOS CEO and Managing Director Neerav Tomar told PTI. 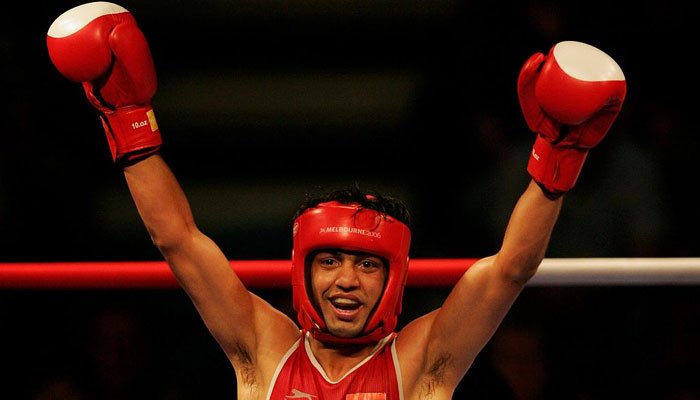 The two would, in fact, be making their professional debut alongside Vijender in a fight night being planned in the next two months in India Vinzite. Vijender, unbeaten in the circuit with 7 wins, is currently based in Manchester but made a smash-hit homecoming in July by winning the WBO title. Akhil, who has to his credit a Commonwealth Games bantamweight gold medal, was Indian boxing’s reigning star heading into the 2008 Beijing Olympics. He stunningly defeated the then world No.1 Sergey Vodopyanov before losing in the quarterfinals.

Boxing history was made for India in those Games, with Vijender winning the middleweight bronze medal, a first for an Indian pugilist. Jitender, competing in flyweight, too, had made a name for himself in the Beijing Games by beating strong opponents, including Uzbekistan’s Tulashboy Doniyorov, en route to the quarterfinals before a jaw injury put paid to his chances of a medal. The two were feted at par with medallists on their return to India owing to their lion-hearted performances and were made DSPs before being eventually laid low by injuries.

Boxing got me recognition, and it got me this job too. I have served my nation without hesitation and pride that you understand only when you wear ‘India’ on your chest. I was thrilled to know that Pro Boxers could now fight at the Olympics, as the restriction had been a massive stumbling block for much earlier,” Akhil, an Arjuna awardee, said.
Famous for his perilously low guard, Akhil is also a World Cup bronze-medallist.

I cannot imagine my life without boxing. Because Haryana Police and our State Government have the most friendly and supportive stance towards sportspersons, it has been possible for many like me to keep pursuing this dream of fighting and bringing laurels to the nation. Pro Boxing looks to be the future direction for the sport’s growth, and I do see it as one more avenue where we Indians should be making a far bigger dent in the coming days,” he added.

The 35-year-old Akhil and 28-year-old Jitender have been away from competitive boxing for some time. While Akhil was last seen in action at the 2014 Asian Games, Jitender has been inactive since his World Series of Boxing stint with Mumbai Fighters way back in 2010-11. He (Akhil) has been a tad unfortunate with injuries before major tournaments in the recent past, but the fighter inside him never really quit. We hope to see the smiling assassin of the boxing world in the ring once again,” Tomar said. We really feel it will go a long way in bringing in more people into the boxing fold and make them see the hard work put in by our athletes,” he added.

India is Facebook’s top priority, driving engagement to catch up with Google

4 Biggest Mistakes to Avoid When Replacing Your Windows