Arshad Khan, the latest sensation, works at Islamabad’s Sunday Bazaar. An Instagram post on October 14 by an aspiring photographer has gone viral Mr. Khan says people have taken more than 150 pictures with him so far. A blue-eyed handsome young chaiwala or tea seller from Pakistan has become an internet sensation after a local photographer posted his picture on social media.

Arshad Khan, who works at Islamabad’s Sunday Bazaar (Peshawar Chowk), has women gushing over his good looks. The Instagram post on October 14 by aspiring photographer Jiah Ali (@jiah_ali) went viral and caused a sensation, with #chaiwala being among the top Twitter trends on Monday. 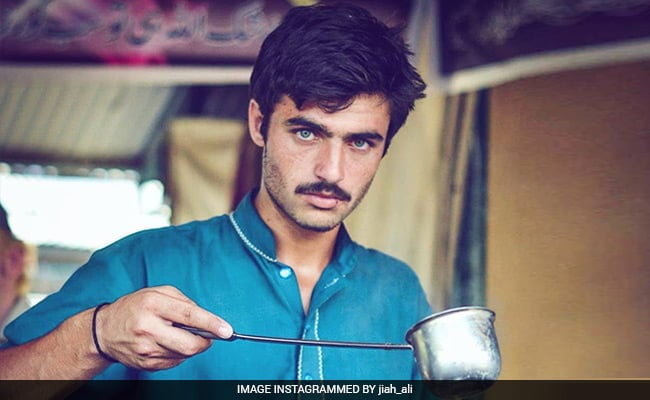 The story was picked up by international media, including popular US website Buzzfeed. In an interview with local TV news, the blue-eyed Arshad indicated that he lived in Islamabad for the last 25 years and joined the tea stall a few months ago, Daily Pakistan reported.

When asked if he knew what Twitter or Instagram is, Arshad replied that he has no idea what those things meant. Brother of 17 siblings, he expressed his ecstasy on becoming famous in one day. Talking to Dunya News, he said that he is happy with his overnight popularity. Still, it isn’t enjoyable when people gather around him for pictures during working hours as he is supposed to work to earn a livelihood.

Arshad said that people had taken more than 150 pictures with him so far. Twitteratti has been abuzz with comments on Arshad’s good looks. “Hello Indians, this is a chai way from Pakistan mashallah,” said one post. ‘I present you with a chai walla (tea seller) in Pakistan who forgot that he should’ve been modeling instead,” said another.

“Meet the steamin’ hot ‘chai wall’ from Islamabad (Pakistan), who’s going viral as we speak,” went another post, with a picture of Arshad attired in blue and pouring out tea. “A chai way from Pakistan is now famous on Indian social media. This is truly aMan kee Sasha,” said one Twitter post.

Another Twitteratti, commenting on the current India-Pakistan tensions, said: “India and Pakistan are divided by terrorism and cricket but are united by hot chai wall. Funny but true.

How much does internet shutdown cost India? Brookings says $968 million