The Indian Games Expo (IGX 2016) made its way to India last Saturday, but more importantly, so did PlayStation VR. With all this hype surrounding VR and hearing tales of it being the best thing to happen since sliced bread, we just had to check out. Luckily for us, Sony brought the PSVR to India and demoed it at IGX.

Let’s start with the headset itself. Looking at the spec sheet, it’s easy to dismiss the PSVR as the budget alternative to the Oculus Rift and the HTC Vive, and it is exactly that, but it has surprising potential.

Unlike the Rift and the Vive, which are festooned with sensors and require fancy tracking cameras to function, the PSVR uses simple LEDs and the PS Camera to track orientation. If you’re familiar with TrackIR, the PSVR uses a similar system. 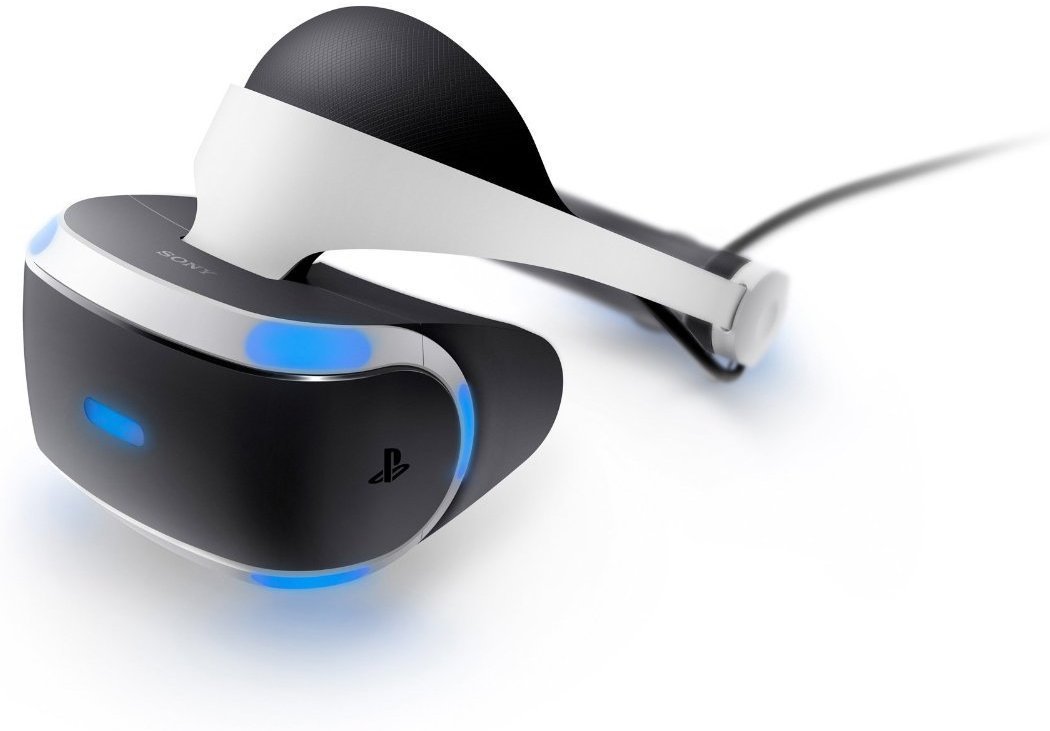 The tracking wasn’t as fluid as I’ve experienced on the Vive or the Rift, but it was more than enough for the kind of games on offer. Tracking aside, my second concern with the PSVR was the screen resolution. The Rift and the Vive both use 2K screens, and even then, images aren’t very sharp. If you’ve ever tried Google Cardboard with a Full HD screen, you’ll have noticed severe pixelation. The PSVR uses a Full HD screen.

Interestingly, I saw no pixelation whatsoever, which was a pleasant surprise. Sony did say that the PSVR uses three subpixels per rendered pixel vs. the two subpixels per pixel on the Rift and the Vive. In effect, this means that Sony’s PSVR is actually rendering a denser image than the Rift and the Vive, making for a perceivably better VR experience.
Sadly, the PS4 itself doesn’t seem to be able to do that amazing headset justice.

Oculus and HTC recommend a pretty beefy system for handling VR. In comparison, the PS4’s graphics capabilities are very tame. In VR, that performance difference is very apparent.

We tried many games on the PSVR: Drive Club, Batman VR, and Resident Evil 7. In all those games, the one factor that stood out was the low resolution of the game. Jaggies and low-res textures were everywhere. It was so bad, in fact, that it felt like we were watching something like a 360p video on a 1080p screen.

Barring resolution, the experience was pleasant enough. We did have controller and tracking issues in Batman and Resident Evil, but those issues were more down to set up issues than PSVR issues. We couldn’t try the Move controllers in-game because they weren’t properly set up at the demo time.

I only spent a total of 20 minutes at most with the PSVR, but those 20 minutes convinced me of two things. The first is that Sony’s done a better job with games and with the headset than either Oculus or HTC. The second is that the PS4 is the wrong console for VR. I hope the PS4 Pro manages to render higher resolution VR gaming because it would be a shame to waste PSVR on just the PS4.

Are you game for it?

“Gooooaaaal by Messi,” screamed the commentator as we entered India’s gaming extravaganza ‘IGX Gaming Expo.’, which was recently held at the World Trade Centre in Mumbai. With a boom in technology, a whole new generation of gamers is emerging. At IGX, serious gamers participated in competitive tournaments for the newest video games, such as FIFA 17 (released in September), WWE 2K17 (released on October 11), and PES (Pro Evolution Soccer) 2017 (rival to FIFA).

Other new games like Mortal Kombat XL, Injustice II, Watch Dogs 2, Star Wars, Mafia III, Tomb Raider, W2K17, etc., were introduced. Games were available for a hands-on gaming experience. “I just play a few games, and I am not a gamer, but I really loved the Mortal Kombat XL game,” said one of the guests at the expo.

But what really drew the crowd was the Play Station section, which launched the Play Station Virtual Reality. The serpentine queue to try the VR headset spoke volumes about how gaming enthusiasts are growing in numbers in India.

Roosh, an Indian start-up founded in 2013, has made mobile game development its passion by launching games for Android and IOS. Ogre Head Studio brought an Indian flavor to gaming through ‘Asura,’ a game inspired by Indian mythology. The presence of tech giants like Alienware and Asus, computer hardware distributors like Acro engineering made for a wholesome technological experience.

Superman, Wonder woman, Flash, Ironman, Pikachu, or Goku, you name any cult character, their T-shirts, mugs, and other souvenirs were available for sale, much to the delight of gamers.

“The Lenovo Legion Y740 and Legion Y540 are touted as professional-grade gaming laptops.”

Lenovo has refreshed Legion its gaming-centric computer collection with the launch of Legion Y740 and Legion Y540 in India. The laptops are the successor to the closing year’s Legion Y730 and Legion Y530, respectively. The layout stays identical between the generations. However, the internals of both Legion Y740 and Legion Y540 has been progressed with new GPUs and the ninth-gen Intel processor. The machines additionally function up to date display alternatives that now help as much as 144Hz refresh charge. The enterprise claims that the brand new Legion laptops are redesigned from the ground up and integrate features based on the comments from online game enthusiasts.

The flagship Lenovo Legion Y740 fee in India begins at Rs 1,29,990, whilst its sibling Legion Y540 will set you to lower back to Rs sixty-nine,990 for the base variant. The laptops will be had for sale on the employer’s e-save Lenovo.Com, main e-commerce platforms, and Lenovo shops throughout the united states of America. Apart from this, Lenovo also announced showcased a variety of gaming accessories, including T730 and T530 desktops; M500 RGB gaming mouse; K500 RGB mechanical keyboard; and H500 H300 stereo gaming headsets, at the occasion.

Their charge and availability haven’t been introduced but. Lenovo Legion Y740, Legion Y540 specifications The Lenovo Legion Y740 and Legion Y540 each ship with a close to bezel-less 15-inch show that bears complete HD resolution and 144Hz refresh charge. The 9th-gen Intel Core i7 processor paired with up to 32GB RAM and 1TB SSD at their middle. The machines also rock the trendy NVIDIA portraits card. The Legion Y540 employs NVIDIA GeForce RTX 2060 GPU, while the Legion Y740 employs up to NVIDIA GeForce RTX 2070 Max-Q card. The Max-Q processors permit for thinner laptops; but, they may be considered much less effective than the ordinary versions.

The inexpensive Legion Y540 is available in Raven black color choice and functions Harmon speaker with Dolby Atmos, white-backlit keyboard, and the same connectivity options because of the Y740. Apart from this, each of the laptops runs Windows 10 out of the field and houses a battery. This is rated to last as long as six hours on a single charge. They also characteristic Lenovo Legion Coldfront twin-fan thermal layout to dissipate warmth from the machine.

Smartphone gaming sometimes feels like a relentless rush forward. New apps are being created every day, and while the odds are low for anyone in particular to succeed, the good ones rise to the top pretty naturally. That means there’s always a new, exciting game to try out, or even a whole new genre starting to emerge. In the past year or so, though, we’ve started to see some bigger changes in how Android users can approach gaming. They’re not all changes that you’d necessarily notice when you open up the Google Play store, but they’ve all had significant impacts on the market as a whole.

The most subtle change was probably Google’s decision to change how permissions were handled for games to make it easier for players to sign up for in-game transactions. The move was made to catch up to Apple, which has always had more of a built-in method for gamers to pay for material within games. The Android operating system had to be altered to make it happen, but it’s now easier for users downloading mobile games from the Google Play store to enjoy all aspects of those games seamlessly.

A bigger shift in Android gaming came when Google released its Pixel smartphone last year and the Daydream VR headset. The announcement came out of nowhere, but it situated Google as the chief competitor to Samsung in the mobile-based VR business. We’ve seen Android programs working with VR headsets before through those same Samsung phones, but this maneuver by Google represented another step forward and a significant shift in gaming. VR isn’t poised to replace typical mobile gaming, but it will represent a major new branch of the mobile entertainment industry.

There have also been some more game-centric shifts in Android gaming in the last year. One that stands out is the continued growth of the casino market through mobile phones. There is now a large collection of gaming apps that fall under this umbrella, where not so long ago, most legitimate digital casinos existed online in browsers and on desktops. The software has been tweaked in a way that allows established casino developers to put out games specifically built for mobile phones, and Android stores are now packed with legitimate, impressive options. It’s not a genre for everybody, but it is trendy, representing a pretty big development in Android gaming.

And then, there was the migration of Nintendo content to the Google Play store after it had started exclusively with Apple. This is the most recent development, given that Super Mario Run was just made available for Android devices in March, but it’s a change that has major implications. Nintendo is one of the most popular names in gaming, and if more mobile games are to come from them, it will be reassuring for countless users to know that Android can get in on the action.