One would imagine that if not for the headline, the conceit of its message would have been obvious enough.
Unfortunately, for most keyboard-warriors inhabiting the comments section of numerous news media websites, it’s not. Or it doesn’t appear to be.

In fact, a certain section of social media has taken to conflating the Narendra Modi wave of 2014 with the unprecedented tsunami of support Donald Trump has been receiving ever since he announced his intention to enter the race for the White House back in 2015. Worse yet, they are confusing the Indian definition of the Right with the American one.

Summary show
That seems as a good a starting point as any, so let’s go from there.
This brings us to the ugly truth.

That seems as a good a starting point as any, so let’s go from there.

As Jaideep Prabhu has written in the past, there is no clear ‘Indian Right,’ to the extent that the conventional Right-Left binary does not apply very accurately to India’s political parties. That is because very few of India’s political parties, the mainstream ones at least, subscribe to the dichotomy of Right-Left in at least two major areas: Culture and economics. In terms of culture, political parties are painted in various hues of majoritarianism and majoritarianism, while in economics, free-market policies and social welfare aren’t mutually exclusive. 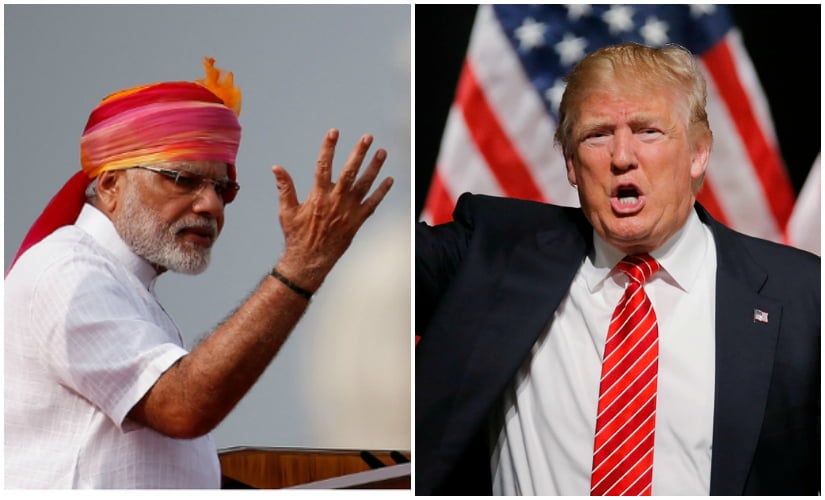 So the idea that what falls under the umbrella of the Indian Right in any way resembles the American Right is flawed in any case.

Moving on to the perceived Modi-Trump links (among the latter’s supporters at least) that marked this weekend’s Republican Hindu Coalition event, we find another incorrect — rather glaringly so — comparison. And here, let’s get down to brass tacks: Trump is not Modi.

A lazily-drawn similarity is that both men are nationalistic. So are Marine Le Pen and Xi Jinping, but we’re yet to see French-Indians and Chinese-Indians organizing gala events to mark these similarities. Further, while both Modi and Trump are indeed nationalistic, their form of nationalism varies greatly: While one espouses a more inclusive form that seeks to carry everyone along, the other pushes an exclusionary brand (which type links to which name is self-evident). In a sense, Modi’s approach has more closely resembled Democratic presidential candidate Hillary Clinton’s message of ‘Stronger Together, than Trump’s.

It’s worth pointing out here that a major difference between the two is that with Trump’s blunt, ill-informed rhetoric, he has gained followers through his divisive views. Modi has benefitted from the fact that members of his own party make fairly outrageous remarks and emerged as a unifying force when he does take to his Mann ki Baat or public rallies to opine on issues.

Another lazy ‘similarity’ dragged out by the likes of the Republican Hindu Coalition is that Trump’s ‘Make America Great Again’ is in the same ballpark as Modi’s mantra of ‘Acche Din.’ And while Modi, in the buildup to the 2014 General Election, spoke about a Congress-must India, Trump also seeks to wipe away all the ills apparently inflicted on the US by eight years of Democrat rule. This is another strange comparison to draw. It’s quite obvious that any Opposition party would cite the ruling dispensation’s unsuitability to win an election. In fact, if an Opposition party were to express satisfaction with the way the ruling regime has been doing things, one would wonder why it is even bothering with the election.

This brings us to the ugly truth.

What actually brought out the Hindu fundamentalist backing for Trump was his threat of a ban on Muslim immigrants — something he failed to completely back or dismiss over the course of the first two presidential debates. What this fundamentalist fringe fails to note, however, is the fact that this sort of discrimination in policy — presently on the grounds of religion — could easily be transmuted to nationality over a period of time.

Trump has made ‘jobs for Americans’ and tightening immigration controls his presidential campaign’s major plank. To think he would abandon it based on one little interaction with a section of Indian-Americans and start handing out H1-B visas is beyond naive. And before comparisons are drawn to ‘Make in India,’ it’s worth noting that Modi’s pet project — as it has been called in some quarters — was launched to increase manufacturing across the country, not to exclude other nationalities.

We could go into the differences between Modi and Trump as people: One, a self-made — that is to say, he worked his way through the cadres — career politician and the other, a man who has pretty much been handed everything in life. One who is respectful of women to the other who is-… well, you know. The dissimilarities are endless.