JAKARTA, Indonesia—The biggest street protest in years shook this sprawling capital on Friday, in a stark display of the more conservative, militant strain of Islam taking hold in the world’s largest Muslim country.

Police estimated that 100,000 people turned out for a rally called by hard-line Muslim groups against the capital’s Christian governor, whom they accuse of having committed blasphemy.

Turnout was lower than some organizers had predicted after the nation’s largest Muslim organizations this week discouraged their members from attending. 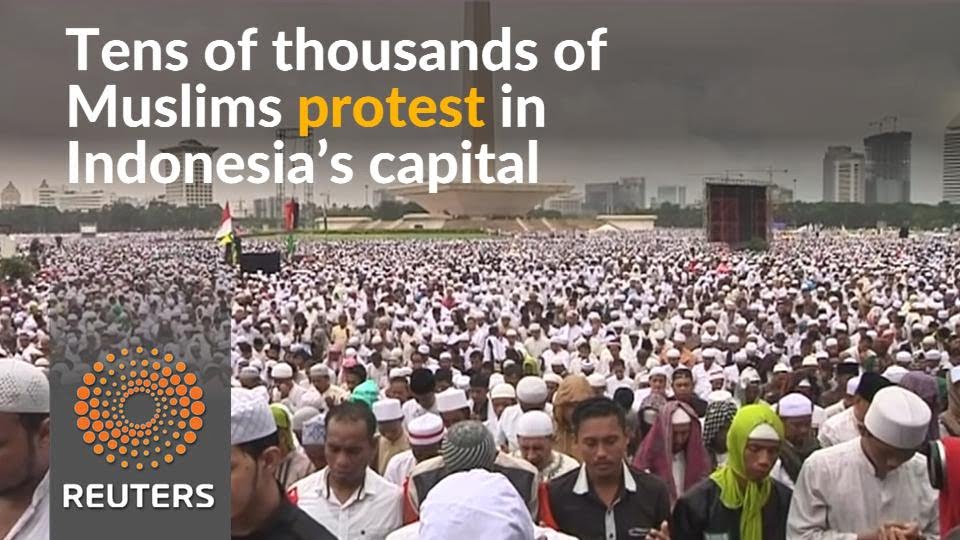 President Joko Widodo had met with other political leaders amid calls for calm. Still, critics say he has been too slow since taking office in 2014 to respond to deepening tensions for fear of being labeled anti-Muslim.

In a recent interview, Mr. Widodo, a Muslim, said religious and political leaders were responsible for “cool temperatures down,” and he vowed to protect minorities. “My government won’t tolerate any discrimination,” “We are one of the most tolerant countries in the world,’’ Mr. Widodo told The Wall Street Journal.

The Jakarta governor’s bid to win re-election in February is building into a test.

“Religiosity is rising, especially among the middle class,” said Yon Mahmudi, an Islamic politics expert at the University of Indonesia. “A sense of identification is increasing.’’

Protesters were aiming for Basuki Tjahaja Purnama, known as Ahok, the most prominent politician among the country’s often-persecuted ethnic Chinese minority—and one of the country’s few Christian lawmakers. He was elected deputy governor in 2012 and elevated to the top job in 2014 after his boss, Mr. Widodo, was elected president.

Some hard-liners had tried to block his ascent then, saying Muslims shouldn’t be governed by a “kafir,” or nonbeliever.
The blunt-spoken Mr. Purnama, 50 years old, also has irritated many with a brash, get-things-done manner that conflicts with Javanese traditions of polite compromise.

Mr. Purnama, now running for re-election with high approval ratings, angered the groups again by citing a verse of the Quran in a public address in late September. He has apologized and said he would cooperate with a police investigation but has since been the target of protests.

Vice President Jusuf Kalla met a group of protest leaders and said that police would pursue a blasphemy case against Mr. Purnama. Local media reported that Mr. Purnama said he would meet with investigators Monday. The maximum penalty for blasphemy is five years’ imprisonment.

Scattered outbreaks of violence were reported as small groups dispersed into neighborhoods, including North Jakarta, where they looted a minimart. About a hundred police officers guarded the complex where Mr. Purnama resides.

Shortly after midnight, Mr. Widodo appeared on television, saying that legal action concerning Mr. Purnama would be swift and transparent, and asked protesters to return home. He also said he deplored the violence that took place after the rally and that “political actors” had taken advantage of the situation. He didn’t elaborate.

According to Australian Prime Minister Malcolm Turnbull’s office, Mr. Widodo Saturday postponed a planned three-day visit to Australia to begin Sunday. Mr. Turnbull said in a statement that Mr. Widodo called him to postpone the visit and that the security situation in Jakarta required the president’s personal attention.

Nearly 90% of Indonesia’s 250 million people are Muslim. The Southeast Asian nation—some 18,000 islands straddling the Pacific and Indian oceans—has a long tradition of moderate Islam in a culture influenced earlier by Hinduism and Buddhism Folk Fests.

But the tenor has changed in recent years. Headscarves for women, once rare, are now widely worn, and Islamic schools are expanding. An effort to outlaw cohabitation and sex between unmarried people fizzled in 2013 but has returned this year, with proponents asking the Supreme Court for a constitutional prohibition.

Religious hard-liners staged antigay rallies early this year, and the government threatened to block websites it says promote lesbian, gay, bisexual, and transgender lifestyles. Netflix ran into trouble with Indonesia’s state-owned telecom provider in part because of complaints about some content.

A movement to ban alcohol is gaining steam, and sales have been banned from convenience stores. Travel to Mecca for the minor pilgrimage of umrah, once a relatively uncommon undertaking for middle-class Indonesians, is newly popular. Security experts say the rising conservatism paves the way for potential violence, pointing to some religious hard-liners who have rebranded themselves as cells of the Islamic State.

In January, Indonesia suffered its first Islamic State-linked attack, with militants receiving funding from the terrorist group via a Syria-based Indonesian who once studied with a hard-line group in central Java. Since then, there have been sporadic attacks, including one last month where an Islamic State sympathizer stabbed three police officers.

“What we’ve seen in the last 18 months to two years is increasing crossover from organizations that started nonviolent-but-hard-line to organizations which are now committed to using violence,” said Sidney Jones, director of the Jakarta-based Institute for Policy Analysis of Conflict.

Still, Islamic parties have done poorly in elections since the downfall of longtime dictator Suharto in 1998. Indonesia has been one of the most stable democracies in the region after overcoming a wave of terrorism and sectarianism in the early 2000s. Many of those at Friday’s protest had ridden for hours on trains and buses from other parts of Java island. They gathered at the Istiqlal mosque, the country’s largest, before marching toward the presidential palace.

A 27-year-old from Pemalang in Central Java said that, while Mr. Purnama isn’t his governor, he sought justice for Islam. Asked about comments from extremists about killing Mr. Purnama, he said: “It is an expression of how upset we are.” Security forces took up positions behind barbed wire around nearby government offices. Authorities said around 20,000 police and military personnel were on duty. There were no immediate reports of violence.

Streets in the famously congested city of 10 million people were relatively devoid of traffic as many workers stayed home. Many shops and offices closed.