At a Thursday haat in Awapalli village in the heart of the largely-tribal Maoist violence-hit Bastar region of Chhattisgarh, almost everything comes at a price. You get roosters for cockfights for Rs 1,000, mahua liquor for Rs 5 a glass and Rs 10 a bottle and red ants to make chapura (chutney made with red ants crushed with garlic, ginger and chilli) for Rs10 a fistful. But health checks and medicines are for free, courtesy a travelling clinic and medical staff who often hail from the community.

Chhattisgarh’s travelling clinics go where no doctors have gone before. Dr Shailendra Kumar, block medical officer at Usoor block bordering Telangana, runs a makeshift clinic under a mahua tree at village haats (market) such as this one each week with a health assistant, a staff nurse, an auxiliary nurse midwife and two volunteers in tow. They take healthcare to people too scared to go to government hospitals and clinics because of real or perceived left-wing extremism (LWE) threats against using state-run hospitals, schools and civic services. Their fears aren’t unfounded. 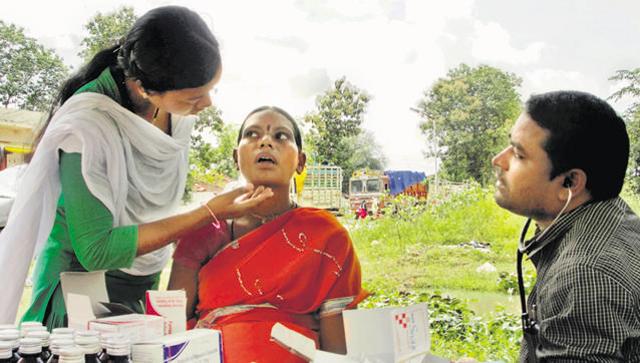 Among all Indian states, Chhattisgarh is the worst affected by Maoist violence. Till September 30 this year, 845 incidents of LWE violence claimed 226 lives in India. Of these, 85 people died in 313 attacks in Chhattisgarh, with Jharkhand being a close second with 265 incidents and 71 deaths. Many villagers still go to traditional medicine men for cure and don’t get the free health services available to them,” says Dr Kumar. “When people don’t come to us, we go to them. They come to haats with their families, this is the perfect place to vaccinate the children and treat those who look ill.

Sitting under a tree where tribals gossip and haggle over roosters, goats, food and chattel, doctors and nurses from the Usoor Primary Health Centre (PHC) screen pregnant women, vaccinate children, treat boils, skin lesions and diarrhoea, and treat people for malaria. Those who need tests are referred to the closest primary or community health centre.

Visibly pregnant Sunita Yalam, 28, was buying a bucket when she was brought to the makeshift health camp for an ante-natal check. She has a difficult pregnancy history – she had a miscarriage last year – and though she is eight months pregnant, she’s not had a single health check when she should have had at least three. Dr Kumar gives her iron and folic acid and asks her to come to the PHC for a sonography later that week to check the development of her unborn baby.

We vaccinate children, screen pregnant women, treat people for infections and use a rapid test to diagnose malaria, which is common in this region, and give medicines to treat it,” says Kumar, who treats around 70 people between 10am and 4pm in his makeshift camp each week. “Over the last two hours, of the dozen people with people with fever, five have tested for the more deadly malaria falciparum and two for vivax malaria.

Camps such as the one at Awapalli haat have become a mainstay for healthcare delivery in a region where government hospitals (both PHCs and community health centres) have been under-utilized for decades because of missing staff, poor infrastructure and people scared of Maoist or distrustful of the government.

In the absence of private hospitals – there are no private hospitals in Bijapur and Sukma districts , only tribal medicine men and unqualified “bengali” doctors – makeshift clinics are set up at each week at different haats across the affected districts,” says Bijapur district collector Ayyaj Tamboli. “We have to build people’s trust so that people use government health systems instead of going to the unorganised sector where they are overcharged for services that are often unreliable,” said Chhattisgarh health minister Ajay Chandrakar.

It’s vital that these services (health, education and other social services) should be seen as a humanitarian non- political activity of the state administration,” says Dr Srinath Reddy, president, Public Health Foundation of India, which is partnering with the state government to take healthcare to the people.

What also kept people away was the absence of services. “We need to offer people quality services to get them to trust state services with their lives and the lives of their families. If government doctors cure them once, they will come back because now they know they will get treated well,” says Chandrakar.

Helping integration with the community is the hiring of medical staff from the community, who not just speak the language but also have a stake in local development. “Tribal girls are being trained and hired so each PHC gets an additional ANM (auxiliary nurse midwife), and the target is to have 50% PHCs running 24×7 in six months, beginning with the ones furthest from a district hospital or primary health centre,” says Subrat Sahoo, principal secretary health,

To upgrade facilities, a policy draft to outsource dialysis and radiology, including CT, MRI and X-ray is district hospitals is ready and tenders will be issued to have the units running by April 1, 2017. Hiring professional healthcare consultants to free up doctors to do clinical work is also on the cards at the district hospital level, as is setting up a public health cadre to manage hospitals. “Over the next six months, we plan to have an infrastructure policy where we will outsource diagnostics, dialysis and hospital administration to free up doctors to staff hospitals and health centres,” Chandrakar told HT.

The real challenge, of course, is ensuring that the localised success is replicated in other remote and LWE-affected districts in India. “Scaling up health services in these difficult areas is possible if trust of the communities is won through sustained attention to their health needs and confidence is built up among healthcare providers that their work is highly valued by both the people and the government,” says PHFI’s Dr Reddy.