HONG KONG — The authorities in Vietnam said on Tuesday that they had arrested a popular blogger who has criticized the country’s one-party government over politically delicate topics, including a dump of toxic chemicals that devastated fishing communities and set off protests.

The blogger, Nguyen Ngoc Nhu Quynh, 37, was detained on Monday in Khanh Hoa, a south-central province. According to the Vietnamese news media, she was accused of distorting the truth and spreading propaganda against the state. The charges carry a maximum prison term of 12 years. No trial date was given.

Ms. Quynh, who writes under the pen name Mother Mushroom, is a co-founder of the Network of Vietnamese Bloggers, one of the few independent writers’ associations in Vietnam. The governing Communist Party heavily controls the country’s news media and publishing industry. Writers who stray outside the system and challenge the party are frequently imprisoned under vague national security laws. 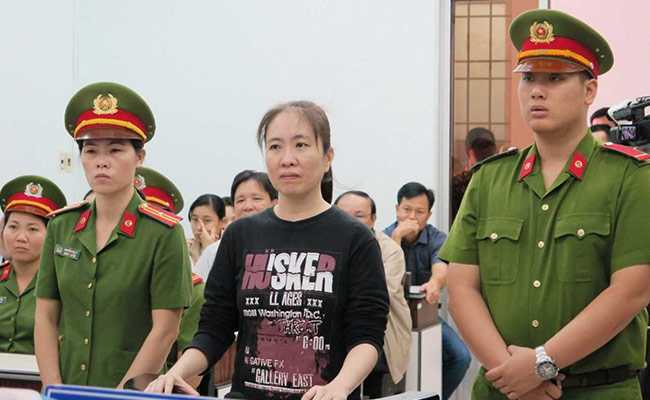 Pham Doan Trang, a dissident writer in Hanoi and a member of the Network of Vietnamese Bloggers, said that the authorities might have arrested Ms. Quynh to intimidate younger bloggers who have been inspired by her online crusades — via Facebook and independent blogs — against corruption, social injustice, and police brutality. But Ms. Trang predicted that the tactic would fail.

“She has a lot of supporters,” Ms. Trang said of Ms. Quynh in an interview via Facebook Messenger on Tuesday. “Many of them will replace her or follow her path.”

Citing a news broadcast, Ms. Trang added that investigators had found materials in Ms. Quynh’s home that criticized the government’s handling of a chemical dump in April at a Taiwanese-owned steel plant in central Vietnam that caused mass fish deaths. It is believed to be among the worst environmental disasters in Vietnam’s modern history.

Although Formosa Steel has agreed to pay $500 million in damages, many Vietnamese have criticized the government for initially remaining silent about the cause of the spill and then refusing to release full details on the likely health or environmental impacts. Outrage over the scandal has festered for months and continues to set off protests in central Vietnam.

In 2009, Ms. Quynh was detained for more than a week after writing about a bauxite mining project in Vietnam’s restive Central Highlands, in which investors included a state-owned Chinese company. Chinese economic influence is a politically delicate topic that the government has tried to play down. She was not charged with a crime at that time.

“It was ugly what was happening in our society,” Ms. Quynh said in a 2014 interview with the Committee to Protect Journalists, a New York-based advocacy group. “My blog asked: Why must we agree with the government on everything? Why can’t we have different opinions?”

In 2015, Ms. Quynh was named civil rights defender of the year by Civil Rights Defenders, an advocacy group based in Stockholm. The group’s executive director, Robert Hardh, said on Tuesday that her arrest saddened him.

“People very often have a picture of Vietnam as one of the ‘tiger economies’ and a tourist country,” Mr. Hardh said in a telephone interview. “But in reality, the situation is really dire for human rights defenders.”