It’s a Monday afternoon; my Amend and property tycoon Cecil Chao and his daughter, Gigi, are poring over architectural plans in their 49th-floor headquarters in Hong Kong’s Central Plaza, their backs to sweeping views of Victoria Harbour. The chairman and vice-chairman of Cheuk Nang Holdings are busy with an array of big residential and commercial projects in mainland China, Hong Kong, Macau, and Malaysia.

Their professional relationship belies a lot of history. Generating headlines worldwide, Cecil offered $65 million four years ago to any man who could woo his daughter into marriage, though she was already married to a female partner. Some 10,000 men responded. Headlines flared again in early 2014 when he doubled the offer, and Gigi countered with a public letter to Cecil asking for acceptance and respect. 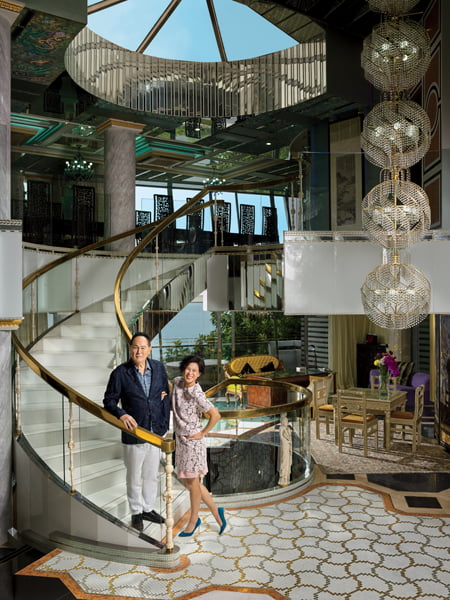 Looking back, Cecil, 80, explains that he made the offer to give his daughter male options, believing that she had struggled to find acceptable boyfriends. After Gigi, 37, spurned the idea, he accepted her decision. “It’s her life,” he concedes. “She decides about her private life.”

For her part, Gigi, a practicing Christian, clearly loves and respects her father, believing that his intent- actions stemmed from love, not malice. “It’s been tragic and comic,” she says, “to have something so private in the open and to become a laughing stock of dinner conversations.” She says the saga helped her develop “humility, patience and character” and increased her capacity to forgive.

Still, she is wary of discussing the subject, which even now generates unwanted emails. “I’m tired of the random notices from men trying to seduce me,” she says. “It has become an engine of online fraud, with impersonators of me or my father going after these men for ‘emergency money’ while stranded abroad, or in some ‘lucrative’ deal.”

While most father-daughter bonds would likely snap under such glaring pressure, the Chaos has not. In Octo- ber 2014, Cecil named Gigi, the oldest of his three children and a fellow architect, the heir to the company.

In the new Cheuk Nang headquarters—the company sold nearby Cheuk Nang Plaza last year for just over $100 million—father and daughter are constantly communicating. Cecil, dressed in a white short-sleeved shirt with a gold iPhone in the front pocket, is positioned at the far end of his palatial office. There’s a trading terminal for his private investments and Chinese and European classical artwork and antiques, including his mother’s inlaid Italian marble table and six blue upholstered chairs Net Maddy.

Just outside, between Cecil’s secretary and the three-person design team, Gigi stands at a high desk wedged into an open space. Her black vest sports the insignia of Faith in Love, a foundation she started in 2008 to help economically struggling youth and elderly. Hanging on the wall are colorful contemporary prints and her appointment to the Hong Kong Air Cadet Corps. Books, binders, and stacks of documents are within easy reach, while course notes for a law degree she’s pursuing are taped on the window, slightly obscuring the view.