Almost 1,500 people were arrested last year under Section 377, India’s colonial-era anti-gay law, the Times of India and Equal Eyes reported. It was unclear how many of those arrested, if any, were involved in consensual same-sex relations. The figure was more than double the figure in an earlier report on the number of arrests under Section 377 during the previous year. 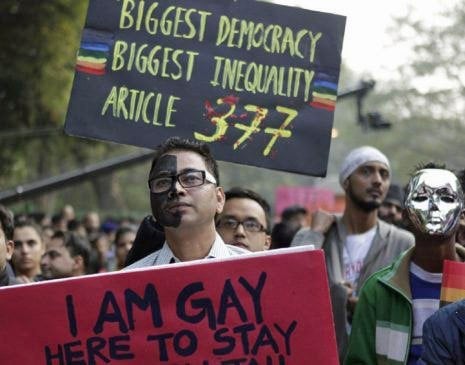 The Times article, however, cited a more modest increase: From 1,148 cases in 2014 to 1,347 cases in 2015 involving 1,491 arrests. Some observers believe that the vast majority of arrests under India’s Section 377 have been for the sexual assault of minors, especially boys. Before the passage of the Protection of Children from Sexual Offenses Act in 2012, Section 377 provided a convenient tool for prosecuting cases of sexual assault on boys.

Close to 14% of those arrested in 2015 under Section 377 of the Indian Penal Code for unnatural offenses were minors. The figures were revealed in the latest report brought out by [India’s] National Crime Records Bureau (NCRB). Police in different states and Union Territories arrested 1,491 people under Section 377, including 207 minors and 16 women, in 2015.

Section 377 says, “Whoever voluntarily has carnal intercourse against the order of nature with any man, woman or animal, shall be punished with imprisonment for life, or with imprisonment of either description for a term which may extend to ten years, and shall also be liable to fine.” While the offense is punishable with life imprisonment, minors come under the special juvenile law, which says that if convicted, they can be put in a shelter home for three years. The recent amendment to the Juvenile Justice Act, though, allows children aged between 16 and 18 years in conflict with the law to be tried as adults in cases of heinous offenses.

A curative petition seeking the decriminalization of Section 377 for consenting adults is pending before the Supreme Court. A lawyer who is part of the case stressed that the decriminalization plea does not apply in cases where the victims are children or non-consensual offenses. “The case in the Supreme Court specifically seeks a reading down of the provision so that in cases where both the parties are consenting adults, Section 377 is not used as a tool to harass, torture or criminalize them,” said the lawyer, adding, “The government has also made a strong law, Protection of Children from Sexual Offences Act, which covers all cases of sexual abuse of children.”