Mumbai: To promote gender equality, the Indian team on Saturday sported jerseys with their mothers’ names during the fifth and final ODI against New Zealand in Vizag. The move is part of the Indian team’s sponsorship rights holder and broadcaster Star India’s ‘Nayi Sochi campaign. India’s batsmen Ajinkya Rahane and Rohit Sharma wear t-shirts display their mother’s names during the fifth ODI against New Zealand.

To make a powerful statement that can inspire millions and propel change, our cricket team today sported jerseys with their mothers’ names at the final ODI of the India-New Zealand series. Our cricket team will serve as ambassadors of new thinking and use the power and platform of sport to drive meaningful social change,” Star India said in a statement. It expects the symbolic gesture to champion the cause of women in the country, ranked 130th out of 155 nations in the world on gender equality, as per the UN Human Development Report 2015. 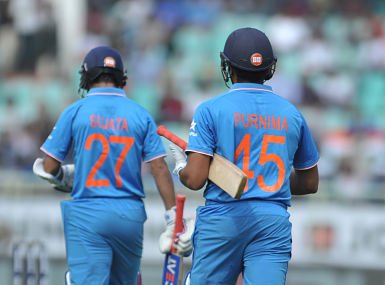 This is the first time that a team jersey is being used so disruptively to power social change. We compliment BCCI and the team for such a transformational collaboration. This time around, both the BCCI as well as Star has put their strength together to highlight the cause of women in our country,” Star India chairman and chief executive Uday Shankar said. The World over sports is a tremendous platform for advocacy and social causes.

Our cricketers sporting their mothers’ names make a powerful and emotive statement, and we are thankful to BCCI and the cricket team for partnering with us on this idea. It will support the voice of the emerging women and inspire millions to acknowledge and celebrate the identity and role of women here,” he added. BCCI president Anurag Thakur said, “With this initiative, we endeavor to honor each woman. Our team has sported their mothers’ names on their jerseys for the fifth ODI against New Zealand with the intent to thank all the mothers for their efforts and sacrifices.

India vs England: Yuvraj Singh unlucky to miss out; Hardik Pandya’s call up a big surprise