Odisha’s Institute of Medical Sciences and Planet reporter  SUM Hospital mishap appears like a shrill alarm. The country’s comatose health system is in desperate need of a lifeline. The hospital accident should not be considered another negligence in India’s long history of medical tragedies. Hospitals cannot be graveyards.
Is Right to Health the answer to all our ills? Will medical disasters end once every citizen enjoys healthcare as a fundamental right?

In its draft National Health Policy 2015, the NDA government has proposed a “National Health Rights Act, which will ensure health as a fundamental right, whose denial will be justifiable.” Undoubtedly, the merits of such legislation cannot be denied. Countries like Brazil and Thailand got more teeth to implement universal healthcare due to such laws. We also have the success stories offered by our own Right to Education Act (2010) that have contributed substantially to the increasing literacy rates and making education more accessible and inclusive.
But the road to legislation still appears very long and may not address all the health system’s challenges. The SUM Hospital tragedy has once again put the spotlight on the government’s commitment to healthcare.

According to the World Health Organisation, India accounts for 21 percent of the world’s global burden of diseases. It witnesses the highest number of maternal, newborn, and child deaths in the world. Nearly 36 percent of Indians suffer from depression in a nation that has 0.47 psychologists per million people. For an Indian, the probability of dying, between ages 30 and 70, from four major non-communicable diseases (cancers, cardiovascular diseases, chronic respiratory diseases, and diabetes) is close to 26 percent. One World Bank report (2010) even argues that we lose close to six percent of our GDP every year due to premature deaths and preventable illnesses. 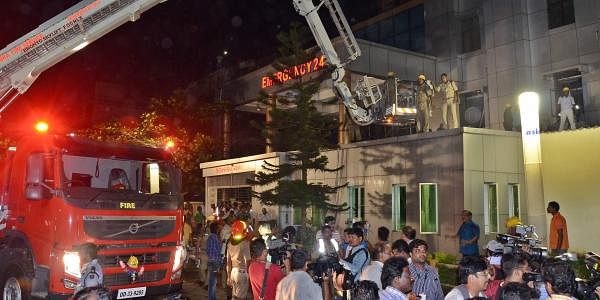 The SUM Hospital fire has exposed the fragile health system of our country. Initial investigations have revealed that this super specialty hospital did not have a fire clearance certificate even though it has been operational for almost a decade. Its website claims that it provides “global standard health care services,” yet the 750-bed hospital did not have a functional sprinkler system to fight the fire. Its staff, too, was untrained to handle an emergency of that scale and magnitude.

Many hospitals across the country (several private and some government) lack functional sprinkler systems. For decades, we have been struggling with overcrowded, understaffed, poorly maintained, and appallingly unhygienic government hospitals. Twin-sharing of beds is today an accepted norm in many government hospitals.
Since the early 1990s, the private sector has been touted as the only alternative to India’s healthcare crisis. But in the absence of a clear regulatory mechanism, private hospitals’ performance has been both terrible and terrifying. In 2011, nearly 90 people died in a huge fire in AMRI Hospital, a Kolkata private hospital. In June 2016, an inter-state kidney racket was busted in Apollo Hospital, New Delhi. In September 2016, a private hospital and two orthopedics were asked to pay Rs 25 lakh to a patient who had suffered 40 percent disability due to medical negligence.

Since 2000, there is a growing concern about the government’s dwindling commitment to providing basic healthcare to its citizens. Take India’s expenditure on health. It is just four percent of GDP, and public expenditure is only 1.2 percent of GDP. This implies that the private sector meets between 60-70 percent of the population’s medical needs.

The proposed National Health Policy has made no radical shift in its budgetary allocations. The current government has proposed 2.5 percent of the GDP (WHO recommends 5 percent for a better health system) as a “realistic” figure to achieve health goals. This implies that even after 70 years of independence, tribal regions are likely to be neglected, and basic immunization services will continue to be inadequate for urban and rural poor.

WHO has not conducted another such study, but experts state that the ranking would not be dramatically different today as successive governments have failed in protecting citizens against the financial costs of illnesses. Indians today struggle with huge “out-of-pocket healthcare expenditures” that do not even guarantee quality care. Even the National Health Policy 2015 admits that this expenditure is “catastrophic,” draining family incomes and neutralizing income increases.

Unless the government considers its citizens’ health as a critical national asset, the health system will remain unplugged.

Life Settlement Underwriting – The Flip Side of the Coin